Thank you!
back
Let’s discuss your project!
write us a message
Our representative contacts you within 24 hours
We collect all the necessary requirements from you
We suggest a few design concepts to choose from
The team of analysts and developers prepare estimation
We keep confidentiality with all of our clients by singing NDA
Download
@
Thank you!
We will be sending you
our lastest news and cases.
main page
Get our subscribe now!
and receive fresh insights
all news
13 Apr 2021

THAT’S WHY YOU NEED A PWA FOR YOUR WEB-SITE

Have you ever tried to open any web-site on your phone’s browser? If you have, you’ve probably noticed how clumsy it can be. Yeah, opening and utilising a web-site on a PC with a big screen is pretty convenient, however doing the same on smartphones, especially older models with screens smaller than 4 inches is less satisfying. The text is really badly read and the buttons are small, ads may cover too much of your humble space.

In order to cope with these and other issues at the dawn of the smartphone age PWA technology was developed.

So what is PWA?

A progressive web application is a kind of software delivered via the web, designed using common web technologies like CSS, JavaScript and HTML. It is intended to work on any platform that uses a standards-compliant browser, and includes mostly mobile devices. Although they have never been ‘real’ apps. Initially created to make the web-site’s interface more suitable for users they were first introduced to publicity in 2007 for the IOS platform. In the early versions they were implemented via Safari browser.

Nowadays PWAs are a reasonable alternative for a full-scale application and are an important part of customer service. As a PWA is basically a browser web-page adapted to be more convenient in usage they are mostly available on any kind of OS. This kind of software uses existing web-protocols and the only change is referred to design. It also makes PWAs more affordable in comparison to traditional apps.

I. It widens your company’s horizon

Sure it does! If your business rivals have mobile versions of their web-pages and you don’t: rest assured – they will eventually beat you. Just try to use a common web-site on your smartphone and then – a PWA, which serves the same purpose. Clearly the PWA app wins this due to its convenience for a potential user and better optimization for smartphones. And if you think that people use smartphones less than other devices like laptops and PCs – they don’t. The latest investigations show that modern people tend to spend their time in smartphones rather than PCs. Yeah, the development of the smartphones brought us to the point, when using bigger computers only makes sense at work. Mobile internet has also become faster and more affordable, not to mention Wi-Fi availability in any modern cities and towns.

II. It’s affordable for businesses and fast for users

As the PWA technology uses already existing, working web-sites as a basement for the future PWA apps it takes significantly less time for the web-developers to create it. Hence there’s no need in the back-end, while developing a PWA, very much like all other kinds of work. Instead of thousands of working hours needed for an app development, the development of an average PWA app takes only a few hundreds of hours. Also what is really important about PWAs – their user-response speed. Unlike traditional web-sites, PWAs are already preloaded mobile web-pages, which saves user’s time and makes online-shopping (for example) more comfortable.

III. You can run it right away

If you are to develop a common app you should consider that you’ll have to get AppStore’s and PlayMarket’s approval in order to submit your app to their platforms. On the other hand your PWA is completely your business and as PWAs aren’t usually available on apps’ platforms you don’t have to go through quite a long inspection period.

Taking all of the mentioned above into consideration it can be stated that PWA apps are a really good solution for ecommerce. No wonder that ecommerce PWA apps are one of the most wide-spread examples of PWA-tech’s usage.

There are a lot of successful ecommerce PWA apps, being exploited by many successful worldwide commercial companies:

Due to PWA apps’ benefits there is no wonder all these companies use this tech. You can make a user-friendly ecommerce PWA app really fast, with little resources, yet with high efficiency for your business.

The exact numbers may differ for different commercial companies, but the results of PWA-tech usage for all of them are the same: 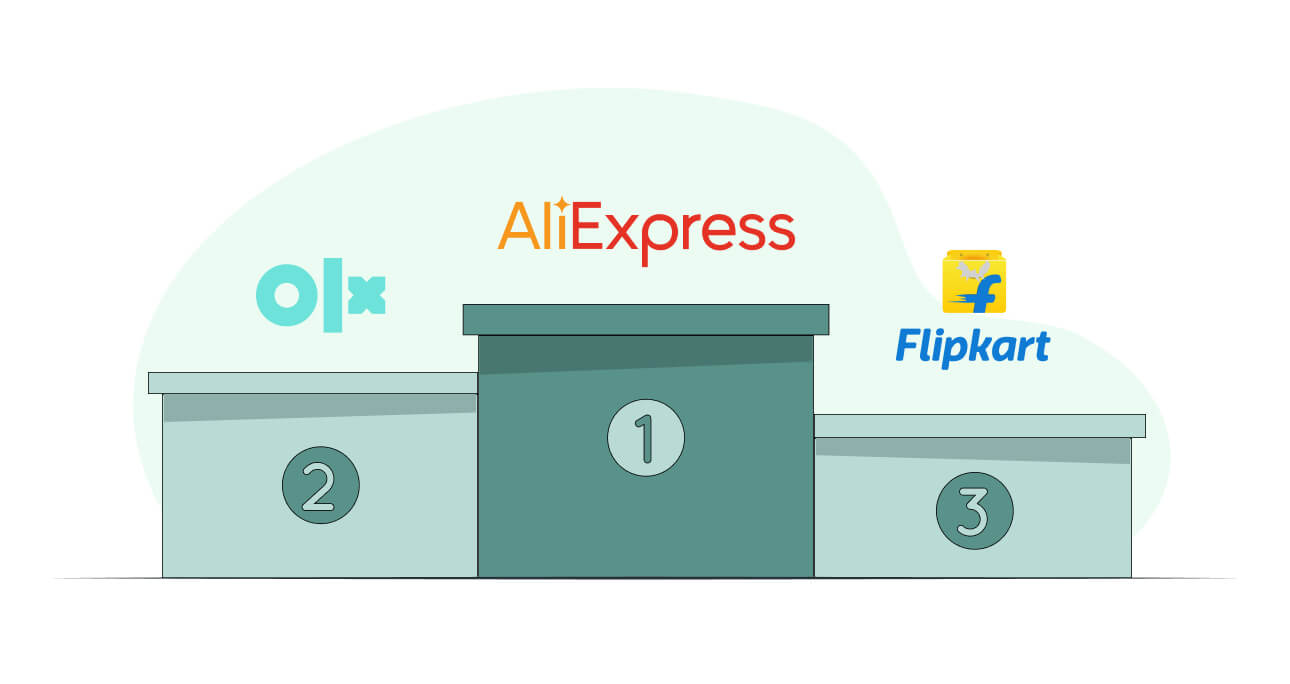 What is the difference between native apps, PWA and traditional web-sites?

A perfect PWA’s interface should look so that user won’t notice any interface diffrerence between the PWA and a native app. PWA apps are more wide-spread than many may think: PWA tech is used by Facebook, Twitter and Pinterest, millions of users find PWAs pretty convenient, just like the native apps, so there’s no big difference between a PWA app and a native app for an average person. However the web-sites, though being often used even on mobile devices are significantly less convenient. This inconvenience doesn’t only deal with interface issues, full-scale web-sites also consume far more Internet traffic than both apps and PWAs.

All the modern companies, global or local ones have their own web-sites nowadays. If you are only to start your business you have to pay attention to your web-site. It should be functional, user-friendly and good-looking. Yet even if you have a really good web-site it doesn’t guarantee you commercial success. The bloodiest battles between the businesses now take place in users’ smartphones, so what is the difference between a PWA app and a native app from a point of view of a stakeholder? Well, though native apps have a lot of pros such as AppStore ratings, their development may take time and a plenty of effort. This time loss may be crucial: what if your opponent launches their app faster? What if you rush and your app will work so badly that it will only make things worse? Basically, those risks are one of the main reasons to create a PWA app for ecommerce. You can make it in a few weeks, you don’t need to go through any additional procedures and you don’t have to worry about interoperability with different mobile platforms.

Thereby, PWAs seem to be a golden mean for businesses, which will ensure both: a stream of new users and better service for old ones.

Challenges with PWA. How to build a PWA app?

1. You should start with your goals. What kind of PWA do you need? Perhaps, you’re going to need more than one? If your web-site has a really narrow specialization you can simply transfer your site into the PWA, otherwise you can separate your web-site for several specialized domains, thus you will be able to create several PWAs – one for each of your domains. This approach makes sense.

2. You should set up a team or find one. There are plenty of PWA app development companies and services nowadays, so that shouldn’t be a big issue of yours. Technologically PWA developing is very much like developing web-sites, so a professional  front-end team is an asset.

3. Think over the design. Apart from a front-end team such a project needs a good UI/UX developers team in order to make your PWA look like a more expensive native app. That will probably be a great part of your success. Users love friendly interfaces and appealing design. A very important piece of your PWA’s design is navigation. Your customers want the PWA to behave like a native app, so your developers will have lots of work with that. Touch interactions coding is a great challenge: if done wrong it can lead to numerous malfunctions. A good idea is to create some simple basic toolbar panel, it may simplify your navigation.

4. Another thing you should make in an app-looking manner is how you show your content.

5. A huge advantage of PWA apps is caching. Unlike traditional web-sites, you can use PWAs without any Internet connection. However, we do not recommend overdoing with this offline eligibility. Make the offline usage time-limited, it will help to keep data (like products availability) relevant.

Of course, when you plan your future PWA app’s development budget you ought to take many things into account:

Hence, there are some really vital aspects of your PWA, which cannot be ignored, you will spend more or less the same amount of money on them. Depending on your PWA’s complexity it may cost 1000$ to 50000$. Although there are some objective factors, high cost doesn’t always mean high product’s quality. If you want your PWA app to be visually and functionally advanced you should, of course, spend more developers’ hours. However, you can save a lot by smartly outsourcing your PWA project. Sapient Pro as a team of decent web-developers will ensure your project’s success within just weeks. We can help you with time-, budget- and project-management. We also have vast experience in MVP projects development, which will let you to run your PWA as soon as possible, so you could start gaining all the commercial benefits of it.

Pandemics and wars occur and end, but trade never stops. It is vital for modern salesmen to keep up with the modern age challenges and market’s demands. If you want to start expanding your company in ecommerce, but have no experience in this kind of projects, you can always contact our friendly team. We will gladly provide you all the necessary services for a reasonable price to make your PWA a huge commercial success.

Tags
#design#development#ecommerce#frontend#mobiledevelopment#PWA#webdevelopment
Last Cases
DISCUSS
SUBSCRIBE
You May Also Like
Top 5 Programming Languages For Outsourcing ...
More
Dedicated Development Team vs. Team Extension: ...
More
How Blockchain Can Help Improve Your ...
More
Blockchain in Real Estate: Use Cases
More
NFT Marketplace Development: What You Need ...
More
next article
Blockchain in Real Estate: Use Cases
Read more
Back
THANK YU!
we will reply you soon :)
we are ready to start
discuss your project
Fill required filds.